Having an Episode: Dagger of the Mind

We stopped by the Tantalus Penal Colony to drop off some cargo including large bottles of prescription drugs. We beamed up a box and guess what, there was a stowaway in it. Now they've got him down in sickbay and we've had to turn around to take him back. Seems he's as mad as a hatter. Now it turns out that he's not an inmate, he's a doctor assigned to the colony.  Well, Bones thinks something fishy is going on so now we're going to have to hang around this rock until Kirk can go down and check things out.

Dr. Helen Noel is joining Kirk in the away team. She came by for a quick up do. I couldn't do her hair myself  and one of the new girls did it. My gods! When she left here she looked like she still was still in curlers. There was one lock of hair that just flopped at the side like Spanish moss. It was supposed to be avant garde but it looked more like something that fell out of the back of the cavalry. Poor thing. Anyhoo, I dabbed a bit of makeup on her eyes, slapped some color on her lips before she ran off to the transporter room. I should not have let her out of here looking like that. Why the true form of a salt vampire has more allure! I sat that new girl down and really gave her a once over. Dr. Noel really needed to look her best especially after what happened at the science lab Christmas party last year. She's a goofy easily swayed, doe-eyed girl. Frankly, I'm not sure how she got to be a psychiatrist. But I digress.


So, there is a crazy man on board and it now seems that he is accusing Dr. Tristan Adams of making him that way.
Now, everyone will tell you that Dr. Adams has single-handedly changed the face of modern penology (and no, that has nothing to do with what you're thinking about, so stop it). I beg to differ. I worked with him for a few years back when I was a fashion model/designer. He was redesigning prison systems on earth and he brought together the brightest young minds of the time to work with him. Naturally, I was there to completely overhaul prison uniforms. The uniforms of the prisoners on the Tantalus Colony are the exact one's I designed so many years ago. They are a bit out of fashion now, but they are classic. The women wear prison regulation Kaftans with vibrant prints. The men wear nice, soft, cotton pajamas. After all, if you are comfortable you are less likely to resort to violence. Anyhoo, Adams brought many people together and then made everything look like his ideas that were executed by others. He has no interest in making the lives of prisoners better or in helping reform others. He simply wants to look like he does. I must say, I honestly think he is a turd. And no, I don't use that term lightly. He did design the logo for his organization though: a hand sweltering in the heat, crushing a dove.

I went by sickbay to see if there was anything I could do to help out. Maybe give Van Gelder a trim or manicure. He's been horribly neglected in those areas. Even a man in a cage needs dignity and the first step on that road is proper grooming. Alas, he has slipped beyond even my reach. His nails are ragged and his grey hair has been left to mother nature to color and style (and although she does somethings well, hair is not among them). Even with proper grooming I fear his mind is beyond repair. Spock's going to slip in there and have a looky-loo. He was going on and on with McCoy about how mind melding is a personal thing for Vulcans. I think he's just trying to make excuses. For someone so logical, Spock can be a real drama queen. And honey, believe me, I understand. There are folks who come in salonbay that I don't want to put my fingers on either but they need help, and beauty is my business. Anyhoo, I digress. 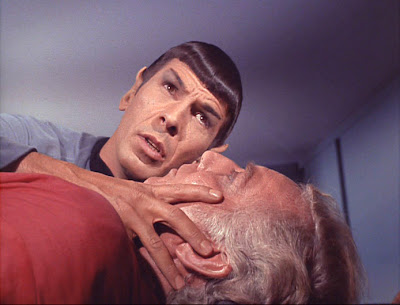 I do know a bit about the Vulcan mind meld. You see, I volunteered as a docent at the San Francisco Alien Anthropology Museum. The museum had very close ties to many of the alien embassies and the Vulcans were extremely helpful in building our collection and compiling resources on their evolution and history. They personally trained our docents for the exhibition "Fascinating: From Loonies to Logicians, the Evolution of Vulcan Philosophy through Folk Art". The Vulcans, as you know do have strong psychic abilities that require physical contact. I actually had long conversations with the personal assistant to the Vulcan attache on this very subject. We dated for a short time, which was strongly frowned upon so we kept it a close secret. Anyhoo, I did learn about the mind meld from him.

As it turns out, hairdressers on Vulcan, coming in close contact with the heads of their clients, inadvertently pick up all kinds of information through unintentional melds. All salons are potential houses of intrigue and hairdressers are bound by a code of client confidentiality strictly enforced by law and tradition. Before the time of Surak (the son of a barber), before Vulcans began to embrace logic, hairdressers amassed limitless power and even threatened to destroy Vulcan civilization altogether. Thus, the Vulcan standard of the bowl cut grew from these dark times. An actual bowl was placed on the head so that the stylist and client would have no physical contact. The bangs and back were cut, taking care not to touch skin on skin. Thus a new breed of hair dresser was born and the priestly caste of Vulcan grew out of this new group of bowl cutting stylists. These stylists were actually the ones who initially spread Surak's philosophy and they had a captive audience in their salon chairs. Today, the bowl is only used in rituals, but the haircut remains. On Vulcan, allowing someone to cut your hair is a sign of great trust, and one still gets one's hair cut and styled by a temple priest or priestess, who is also a master cosmetologists. 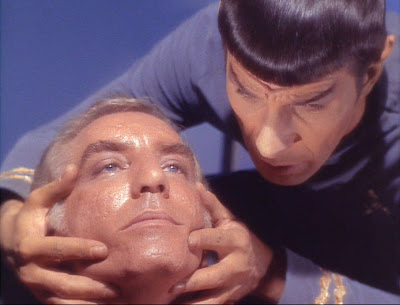 Through his mind meld Spock found out from Van Gelder that Adams is using some kind of mind wiper machine. Kirk is definitely in danger on the planet below and now we can't get to him because of the force field blocking transport. I don't see how they could beam down anyway because the facility is so far undergound. I told Spock he was out of his Vulcan mind if he thought he could beam in there even with the transporter shield down and he said, "I believe Nurse Chapel is in need of a cream rinse." Well, I know where I'm not wanted so I just let out a little "hmpf", pursed my lips, turned on my heels and walked right out of there. I did stop to grab that medicinal bottle of Saurian brandy and then I went straight to Rec Room 3 and demanded chocolate from the replicator.
________________________________________

Well, Kirk is back on board and safe. So is Noel. I insisted on redoing her hair myself and she looks like a dream. She told me everything that happened on the surface below. While I was working on her, Mr. Spock came into Salonbay and made an appointment with me to have his hair done. Up until now he has cut it himself. Why Mr. Spock. I believe that qualifies as an apology and I do so humbly accept. 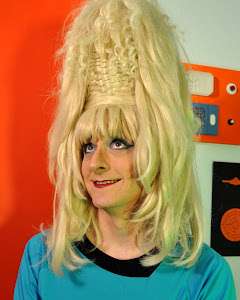